I’m sitting in the back of a plush chauffeur-driven BMW surrounded by the Upper Engadin valley’s amphitheater of Alpine peaks, on my way to eat not the region’s fondue (bugger) but Japanese cuisine from some of the Land of the Rising Sun’s best chefs (I’ll survive after all). The St. Moritz Gourmet Festival takes place in late January, an annual event that hosts top chefs from around the world. This year’s theme is Yokoso Nippon (“welcome to Japan”) and nine Michelin-starred chefs – including Nobu, although he only participated in the days prior to my arrival, sadly – have taken over the kitchens of some of the moneyed resort’s best hotel kitchens.

This evening, I’m on a so-called “Gourmet Safari”, and my first stop in the luxe Alpine wilderness is legendary Badrutt’s Palace Hotel. Handing my coat over to flapper girls in fringe minis, I descend into a kitchen adjacent to King’s Club (Switzerland’s oldest nightclub) already filled with gourmands, and I’m promptly proffered a glass of champagne. There are more safari-goers than tables and, as nibbles of thin slices of beef filet with truffle teriyaki and salmon sashimi are passed around, I find I don’t have quite enough hands to clutch all of the drinks and bites I wish I could at once.

Lobster with truffle and peas at Giardino 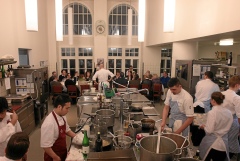 The chef’s table at Waldhaus Sils 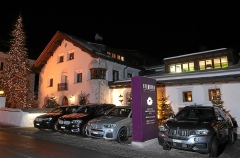 Giardino, with traditional Engadin decoration (sgraffito)
From there, the group separates: one half to the east, and the other to the west, not to reconvene until we arrive at the Carlton Hotel for dessert. A line of BMWs wait outside, and jumping into one just about as quickly as I can in the cold evening, we zip along to our next stop, the exclusive Suvretta House Hotel, for our second course. Whisked inside, we make short work of chef Masayasu Yonemura’s Japanese sweet tomato abalone and shrimp before being being gently herded off to our next destination: the positively charming Hotel Giardino Mountain. Our chef’s table is brilliantly decorated with exotic blooms – soon to be joined by melt-in-the-mouth sashimi, and a carefully constructed dish of tender lobster and perfectly cooked peas topped with black truffle shavings for a pleasantly contrasting mix of textures.

So far, each destination had welcomed us at kitchen-side chef’s tables, but Waldhaus Sils plonks us right in the center of the gourmet action, with a table set up right inside of the hotel’s absolutely cavernous cooking space. Beef mille-feuille with wasabi, paired with a robust burgundy shows off chef Keisuke Matsushima’s skill for fusing Japanese and French flavors. But there’s one more stop left to go, and so we finish off our evening with a selection of desserts in Carlton Hotel’s elegant ballroom where a long table is lit by towering candelabras. Despite the fine surroundings, excellent cuisine and presumably discerning palates, the stuffy atmosphere (and sometimes matching attitudes) that can occasionally accompany these sorts of things was absent. It was simply a night of great food and interesting conversations with fellow world travelers. In other words: a pleasure.

The dining room at the Gourmet Festival finale gala

A chef preps dessert at the finale in Kulm Hotel
The following evening I dressed up for the Great BMW Gourmet Finale at the storied Kulm Hotel, the birthplace of winter tourism just over 150 years ago. Mingling in the lobby with glamorous guests (I immediately regretted leaving my floor-length sequined gown back in Dubai), a flurry of Japanese finger foods marched away on silver platters from live cooking stations manned by the visiting chefs. Spoonfuls of caviar atop marinated trout, lobster with Asian squash and live renditions of traditional music opened the evening before we took our seats for a gala dinner in a hall decked out with Japanese touches.

Sitting at my table, I can see I’m in for a night of wine pairings; the table is a shining sea of variously shaped glasses. As with the start of many conversations between women (I’ve found), I break the silence with my dining neighbor – a Japanese lady currently living in Geneva – with a complaint about how awfully cold the room is, and unsurprisingly, she vigorously agrees. As the Japanese culinary creations appear, chopsticks are wielded and my neighbor is baffled over the lack of chopstick holders (it is a puzzler for such a top-end Japanese affair, and I’ve found that the Swiss are nothing if not thorough, making it doubly surprising) and she helpfully creates origami rests from the menu for my sticks. I am (ah… slightly sozzled) and probably react with a touch more amusement and delight than is necessary. Gobbling down poached abalone, steamed rice with crab, leaf-wrapped black cod, stewed wagyu and delicately layered opéra cake, I eventually call it a night and roll myself out to an eye-wateringly expensive taxi back to my hotel (like US$25-30 to go maybe five minutes, give me a break, Switzerland).

Thankfully, I’ve got days ahead to snowboard these couple of evenings of gourmet gluttony off. But I’m only cautiously optimistic, at best, about losing the pounds. After all, there are still days of Perrier-Jouët-laden snow polo tourneys and any number of local rösti, cheeses and Engadin nusstorte (nut cake) to be had.