Relentless heat saturates every gust of air, thick humidity attaching itself to sunglasses whose wearers have the temerity to venture beyond air-conditioned spaces. The beach seems like a refreshing proposition until your feet touch the scalding sand and soupy, uninviting water. It’s summer in Arabia and a time when most desert dwellers look longingly to the colder climate of Europe and its merciful surfeit of cool, leafy parks and gentle blue skies. While we are lucky enough to have an artificial ski slope in Dubai, dedicated skiers – or anyone yearning for a long wintery escape midsummer – can still discover stubborn pockets of white powder where it seems that winter never left.

SNOW PALACES
We’ve come a long way since the first indoor ski slope, ‘Schneepalast’ (snow palace) was unveiled in Vienna in 1927. Taking up residence in an abandoned railway station, the artificial snow was made of soda – which not only allegedly left a funny taste in the mouth for those who were unlucky enough to fall face forward, but which also itched. Today, indoor slopes feature snow-making machines that mimic the real stuff much more closely. The UAE’s Ski Dubai achieved world fame as the first ski slope in a desert – but with penguins, the first indoor black run and a hotel with cosy Aspen-themed chalets with piste-side views, it’s more than a ski run; it’s a 365-day resort.
DETAILS: +971 4 409 4000, skidxb.com

Close to London, The Snow Centre offers summer ski passes, a main and trainer slopes, a freestyle park, sledging sessions and even an après bar. And while Alpine landscapes may be beautiful, there’s no better place to learn than in a controlled setting. “The environment is stable – no bad weather to worry about and slope conditions are consistent, so the usual variables are removed,” says Andrew Lockerbie, CEO of the British Association of Snowsports Instructors. For a Bavarian experience, head to Scotland, where Snow Factor includes a German beverage menu, an ice-climbing wall and a variety of challenges.
DETAILS: +44 344 770 7227, thesnowcentre.com; +44 147 986 1717, basi.org.uk; +44 871 222 5672, snowfactor.com

Elsewhere, travellers can mix an exotic holiday with snow in Bucheon, South Korea, where Woongjin Playdoci Snowdoci vaunts a 270m-long slope, bobsled tubing and even a mogul course. Meanwhile, DKB Skisport-Halle in Germany is the country’s first cross-country skiing hall. With ascents and descents of up to 12 per cent incline, and a constant temperature of -4⁰ Celsius, it offers snow fans optimal conditions year round. There are ski instructors on hand for beginners, as well as professional skiers.
DETAILS: +82 32 310 8000, playdoci.com; +49 36842/5326623, oberhof-skisporthalle.de

SUMMER DOWN UNDER
Thanks to the Earth’s tipped axis, it’s possible to experience snow by jumping the equator to the southern hemisphere, where ski resorts in Australia and New Zealand are in peak condition from June to September. In Victoria, Australia, perfect powder and exceptional après-ski beckon. At Mount Buller, 300 hectares of skiable terrain is complemented by the country’s highest spa, while sybaritic pleasures beckon at Falls Creek with easy access to shops and dining.
DETAILS: +61 3 5777 6077, mtbuller.com.au; +61 3 5758 3415, fallscreek.com.au

Australia’s Kiwi neighbour boasts longer vertical descents and terrain laden with perfect powder – a landscape that few know better than passionate skier Paul Swettenham, director of Sunstone Adventures. “The ski fields in New Zealand offer fantastic medium-length trails with challenging steep runs and a variety of terrain,” he says. Guests used to meticulously groomed resorts should take the time to experience the country’s ‘club fields’. “These are rustic ski fields open to the public where you stay on the mountain and can challenge yourself with non-pisted slopes – a must for any powder hound. Try Craigieburn, Broken River, Mount Olympus, Mount Cheeseman and Temple Basin, all located about two hours from Christchurch.”
DETAILS: +64 2 153 2008, sunstoneadventures.com

For the best of New Zealand’s ski fields, however, Swettenham recommends the ski resort of Mount Hutt on the South Island, an award-winning destination with a laid-back atmosphere and plenty of groomed slopes and off-piste opportunities for thrill seekers. It’s conveniently located just under two hours from Christchurch. And on North Island, Mount Ruapehu, with its two ski fields, Turoa and Whakapapa, is another one that’s tough to beat in the region in terms of landscape and setting. One Mt Ruapehu lift pass gives you access to both Whakapapa and Turoa ski areas. On an active volcano, Turoa boasts Australasia’s longest vertical descent at 722m, while Whakapapa (pronounced ‘fukkapukka’) features 65 named runs, a halfpipe and terrain park, along with spectacular views of Tongariro National Park.
DETAILS: Turoa: +64 6 385 8456; Whakapapa, +64 7 892 4000, mtruapehu.com. nzski.com/mt-hutt

ON ICE
Don’t make the mistake of thinking that North American and European ski resorts
call it a day come April. In the Swiss Alps and British Colombia’s Coast Mountains, glaciers that crown exceptional ski resorts remain chilled and snowy even in the height of summer. In Canada, Whistler Blackcomb is one of North America’s most renowned destinations and includes Horseman Glacier, accessed from the appropriately named ‘7th Heaven Express’ lift. While the terrain is fairly basic, it attracts advanced skiers and riders clad in t-shirts and shorts for a June-July summer ski season. At 2,170m, its lower altitude leaves some room for concern about the conditions, however Luke McDowall, owner of Treeline Camps, reassures otherwise: “While it’s still on a glacier, being a coastal mountain range at a low altitude means it gets hot in summer. Thankfully the powers-that-be at Whistler Blackcomb have started to address this situation and will introduce more snow guns on the glacier over the next few years.” In the meantime, glacier skiing is still an experience not to be missed. “Summertime skiing is out of this world,” says McDowall. “Sometimes we see temps on the glacier as high as 15°C. This makes for hard-packed conditions in the mornings and soft conditions in the afternoons.”
DETAILS: +1 604 967 8950, whistlerblackcomb.com; +1 604 907 1997, treelinecamps.com

On the other side of the Atlantic, Zermatt is the name on everyone’s lips for a top-end winter getaway, but it is Theodul Glacier, at a soaring 3,883m with views of the dramatic Matterhorn, that keeps the season going 365 days a year. Magalie Perren of Zermatt Tourism says it is the peak of summer ski experiences. “Matterhorn glacier contains the biggest summer-skiing area in the world, with 21km of pistes.” With more difficult runs, it may not be the most suitable destination for families or learners, but dedicated skiers feel right at home. Given the ever-changing nature of a glacier, dangerous natural obstacles can be a concern, but Magalie underlines the attention to safety in the ski area. “Every May and June the area is scanned for crevasses, and we open them up, fill them with snow and close them again. This is crucial for security.” Add in the charming Swiss village atmosphere and the opportunity to pair your sunglasses with a ski jacket and a bikini all on the same day, and you’ll find this is a summer holiday that offers the ideal – if unexpected – respite from the typical June-to-August heat wave.
DETAILS: +41 27 966 8100, zermatt.ch

*This was originally published in the summer 2016 edition of Citizen K Arabia. View the printed story below. 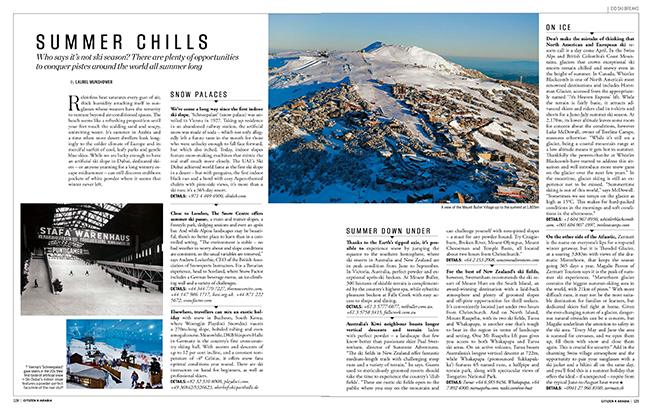