A number of years ago I surprised the boyfriend with a birthday getaway to Anantara Desert Islands resort on Sir Bani Yas Island. It’s an island reserve about a 90-minute drive past Abu Dhabi (coming from Dubai) that’s been irrigated, landscaped and populated with wildlife to resemble an African savannah. It was fantastic and even though we were there during the soft opening period of the hotel/island – I don’t think the hotel was fully open yet, the “savannah” hadn’t properly established itself and the wildlife hadn’t yet been released from their individual enclosures to live together – I still loved it and couldn’t wait to return and see what it would be like once established. It took longer than I had hoped but I finally made it back there last month.

And it had certainly changed. 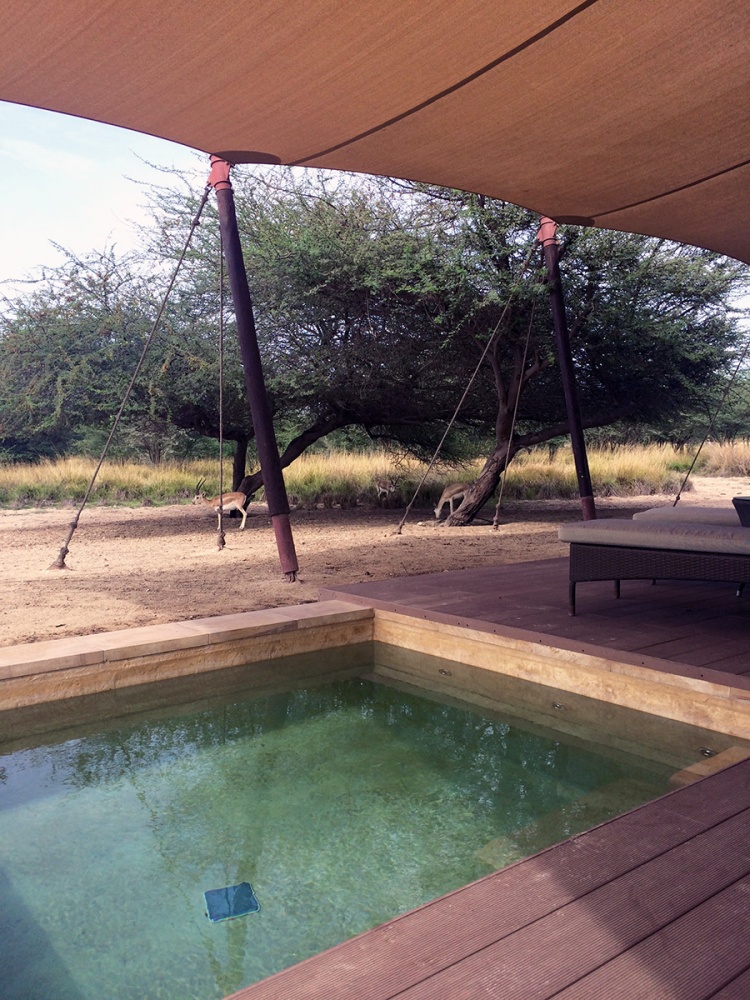 The single hotel was no longer alone: two more Anantara-managed properties, Al Yamm all-villa resort on the beach and Al Sahel all-villa resort within the reserve, had sprung up, a stable and equestrian center had opened and the wildlife were living harmoniously together. Or as harmoniously as gazelles, cheetahs, oryx and hyenas can be on the same playing field. 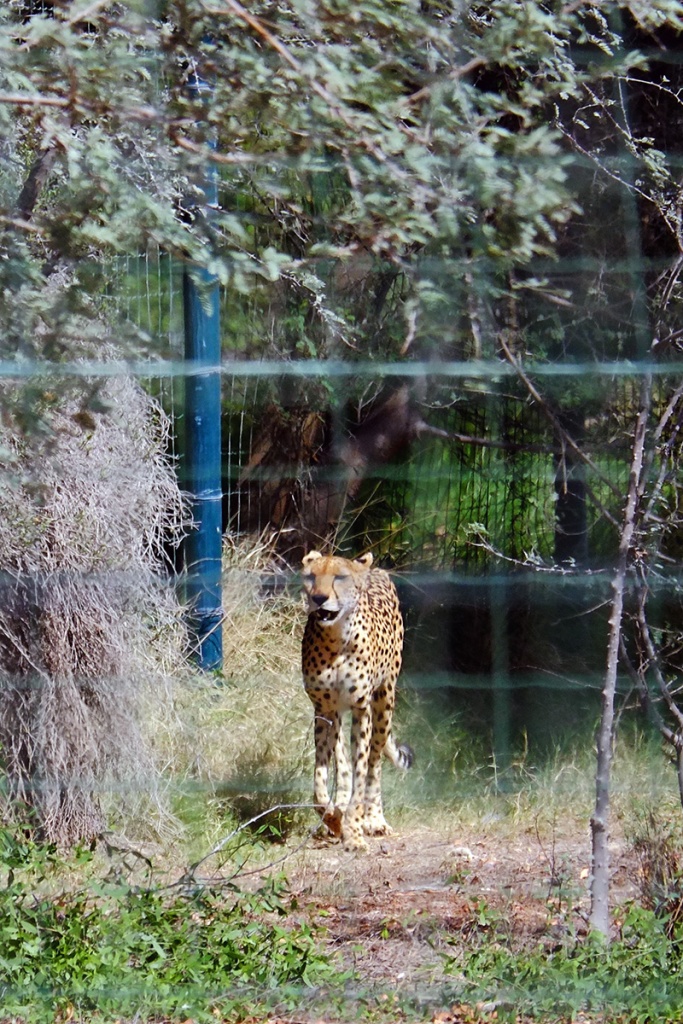 But with the additional hotels and its rise as a popular regional getaway also came greater nuisance. The previously painless transfer from the jetty via speedboat to the island, to the hotel via 4×4 was no more. Instead we faced a tedious test of patience as we paced around the jetty reception area with dozens of other guests waiting for the boat to leave, which it eventually did – 45 minutes late. After the 20-minute boat ride to Sir Bani Yas, we were dumped into the island reception area where, again, we waited a good 30 minutes before people were loaded onto buses to their respective hotel/villa (each stay is on a different part of the island). After a three-hour car ride from Dubai, this additional hour-plus escapade – which effectively canceled our lunch due to mid-afternoon arrival just before a pre-scheduled 4×4 safari – left me tired, annoyed and headachy. Surely the transfers could have been accomplished more efficiently. It’s worth noting that a small jet (or even a seaplane) flies to the island through the week (although not every day, I believe) and I think I’ll be hopping on that for my next visit. I have little – no, that’s wrong – I have zero patience for being kept waiting.

Having stayed in the Desert Islands hotel last time and living minutes from the Dubai beach, we decided to check into the rooms located within the reserve enclosure, Al Sahel Villa Resort, for a new experience. Surrounded by tall savannah grass, acacia trees, trumpeting peacocks, excitable guineafowl and dozens (maybe hundreds) of gamboling sand gazelles, the villas are unsurprisingly designed and decorated to further the African illusion – and it works. It’s unlike anywhere else that I’ve been on the Arabian peninsula and it really feels like you’ve gotten away despite the fact you’re still in Abu Dhabi. Returning to the island, I think I’d have a hard time going back to the hotel or trying the waterfront villa resort. The villas are large – although not opulently so – and go for a natural African vibe with lots of wooden furnishings, patterned textiles, carved wooden animal hangings and a copper freestanding bathtub. Outside, a large patio with a small plunge pool looks over tall grass, grazing gazelle – and perhaps soon, giraffes. The villas are within the reserve but fenced away from the cheetahs and other creatures (apart form gazelles and birds), however during my visit I was told that they were hoping to soon introduce a few giraffes into the villa enclosure. As with pretty much every Anantara resort I’ve ever been in, I faced issue with the lights. There were so many buttons for lights and no explanations. The electricals seemed to be a bit off generally. The ceiling fan wouldn’t stay on for more than about two minutes. A bedside lamp would only turn off if you yanked the plug out of the wall (the switch simply did not work). And I could not, for the life of me, figure out how to turn on the bathroom lights without turning every light on in the villa. This became an issue at 5am one day when the boyfriend was fast asleep while I had to get ready to leave for a morning horse-riding safari. I had no choice but to get ready by the light of my iPhone.

Al Sahel has only one restaurant – Savannah Grill – that specializes in steaks (it’s also where a simple breakfast spread is served). I did not go for the steak because as I’ve aged, I’ve found I can no longer eat them without feeling discomfort for the following 24 hours (oh but they are delicious), but apparently the steaks are excellent. I can’t actually remember what I had (which speaks volumes) but I recall it being good but not spectacular (clearly). The boyfriend went for a venison curry, which tempted me (but I decided to opt out and wait ‘til I get to Mauritius, where it’s apparently an island specialty) that also was awarded with an average rating.

There are also transfers to the hotel, which has a few more restaurants, so we decided to head over there for another dinner at Amwaj, an Arabic restaurant. Service wasn’t great anywhere that I had found yet (slow and requests often result in confusion) but it was particularly bad here. Despite the fact no one was seated in the restaurant, we were unable to be served or sit there as a group was coming in (although all of their seating was outside on the lawn, so I didn’t get that but whatever). I understand groups are difficult, so, as requested we waited to be seated in the outdoor lounge area and refrain from making our orders until the group had been served. We waited. And waited. The group was clearly arriving very late and there was no progress in terms of feeding them. Still not offering us seating within the restaurant itself, we found that they were serve us in the lounge seating. The food – a selection of Arabic bites from fattoush to sambousek was good but like Savannah, nothing to rave over. My main was the most bizarre of all. I ordered a chickpea and meat dish with yogurt. I got the chickpeas and yogurt in spades but no meat that I could find. Weird. I was hungry so I just went with it. I couldn’t be bothered to wait for a fix from the slow service. It was still good – it just wasn’t as advertised. Had they forgotten the meat? Did they get my order wrong? I don’t know and I didn’t have the energy left to to find out exactly what went wrong.

So it’s really the surroundings and the activities on offer that make this destination stand out. Out on a 4×4 safari, cheetahs are found napping under trees, there’s a giraffe traffic jam, wide berths are given to ostriches (it’s mating season and they are in shitty, aggressive, car-chasing moods) and large herds of deer, gazelle (sand and mountain gazelles make up 5,000 of the wildlife population of 10,000), oryx and antelope laze in the sun. Kayaking is a way to explore the shores of the island but make sure to schedule this while the tide is high. Unfortunately, we went during a lower tide and were able to get near to the mangroves but not actually kayak through them. They looked beautiful and sound like they’re alive with colourful marine life. Another time.

The most exceptional of the activities that I tried was a horseback riding safari. There are three types: beginner rides which is just walking around the stable area; an intermediate ride walking and trotting through the bush; and an advanced ride with cantering through the main wildlife enclosure – and nothing between you and a cheetah but some grass. Opting for the latter (which my neglected riding muscles made me rue) this was the experience to go for. Two cheetah brothers were waiting for us as we entered the enclosure at the beginning of the ride – just stretched out in the sun a number of yards away – and after we had all gandered each other good and intensely we cantered off but before long found three more cheetahs (all five of the island’s cheetahs – a good morning for sightings). These cheetahs were in neighboring enclosures with fences between us as their territorial nature mean they must be kept separated. As we trotted and cantered through the reserve for the next 90 minutes, I got up close and personal with giraffes, gazelles and rock hyrax comically falling out of trees. It was – by far – the best way to experience the island.

The nuisances in the resorts do add up but the island is still such a regionally unique and gorgeous destination that I’d happily return. Inefficiencies, tedious transfers, bizarre electrics, service not befitting a luxury five-star resort and all. Sir Bani Yas itself is just that great.