So, one of the new things that I got to do during my recent Christmas trip to England, was to visit a fox hunt meet on Boxing Day. But substitute the fox for the more humane trail of fox urine for the hounds to follow, and substitute my excitement to see a bunch of riders in awesome red jackets for disappointment to see, like, jackets in every color but red.

Really, there wasn’t much to see at all. You stand around with a crowd of people, and then after pretty much ages (presumably when the riders have had enough hits off the flask), someone finally sounds the horn and off go the hounds and riders, hot on the exciting trail of fox urine, like so:

Use your imagination to add about 2 more seconds on the images above, and you’ll have seen what I saw. Huzzah.

I also stopped by Burgh Castle, ruins of an old (obviously) Roman fort: 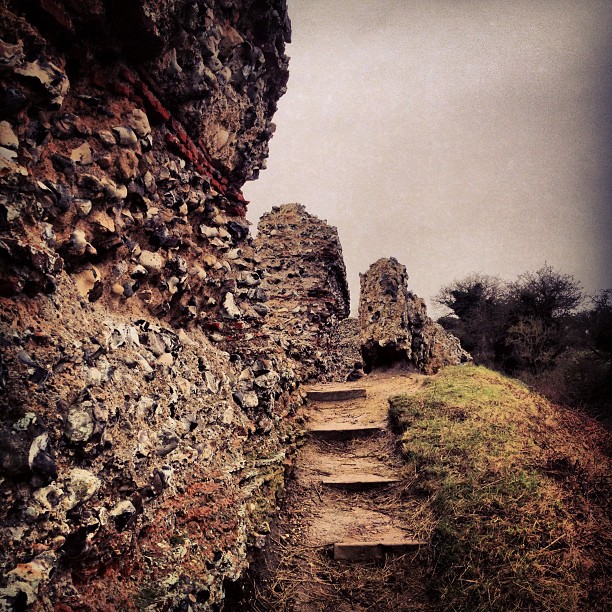 …but was more interested in the quaint windmill nearby:

Most of my time in England during this trip was spent outside of the city, in Norfolk, but there was still some time to have fun in London, despite the rain, the never-ending horrendous, awful, cold rain. We stayed at the Sanderson Hotel, which I rather liked. It was going for a bit of a dreamy and surreal vibe (lots of Dali nods in the decor), and I was surprised to see that it quickly beat out The Standard High Line for trippy-est elevator. I don’t have any photographs because during my stay I was a combination of both too lazy and too busy to bother taking photos, but the galactic elevator still deserves a mention.

Landing in Dubai (although I must admit, I don’t think I’ve ever been so appreciative of Dubai’s weather until this extraordinarily rainy and dreary trip to England).

[ And lastly, I finally went through with it and got a tattoo whilst in London. Not to be shown yet, though, as it’s still, annoyingly, healing. ]