Back home, February was absolutely the most brutally cold, horrific month of the year and I hated it above all other months. It’s not quite the same out here, but it is a bit disappointing in that I feel it’s normally when summer starts to creep back in, and you know by the time you get to late March you can depend on the daytime to start to become uncomfortable if you plan to spend any energy outdoors. So with that in mind, February is generally when I start to feel I need to take advantage of the nice weather before it’s too late.

This weekend was one of those times, and we settled on checking out the ‘hanging gardens’ walk just on the Omani side of the Al Ain border. We thought it would be an easy border crossing (show your passport and be on your way as some of the border posts tend to be out there) but were mistaken. If you go, note that you will indeed need to get stamped out and then back into the UAE, which is something of a nuisance for a 2-hour walk.

The hanging gardens are located on Jebel Qatar, about a 15-20km drive into Oman from Al Buraimi. This easily ended up being one of my favorite walks I’ve taken in the region. It was both beautiful and quiet. It’s rare to find a place that isn’t filled with groups of people picnicking and throwing their garbage all over the place and generally being assholes (any wadi in the UAE, I’m looking at you). Perhaps the fact this was on the Omani side had to do with the fact there was nary an asshole to be found and there was no litter to be seen.

After driving down a dusty, rocky dirt track for a bit that is off of the main road, you’ll end up parking your car as close to the base of the ridges ahead of you as you can get. At this point, the location looks pretty much like every one in the region: craggedy-ass stark mountains, rocky hills, boulders hanging out with a few thorny bushes, and a moon-like gravel plain behind you (I want to start a photo game called ‘Moon or UAE?’ where you look at two photos and try to decide which is which, because I swear when you’re near the mountains or wadis, there is very little difference). Look up though, and you’ll see a cave high in the ridge (awesome, I love caves, even though common sense tells me I shouldn’t what with the horrifying centipedes, inbred freaks and who knows what else living in them) and some random plant life hanging off the cliff face.

Your next step is to go up. Up, up, up, scrambling over rocks and making them fall on the person climbing behind you, while simultaneously avoiding stepping on or grabbing on to any donkey poo decorating the terrain (sadly, despite the incredible amount of poo in the area, not one donkey was seen). 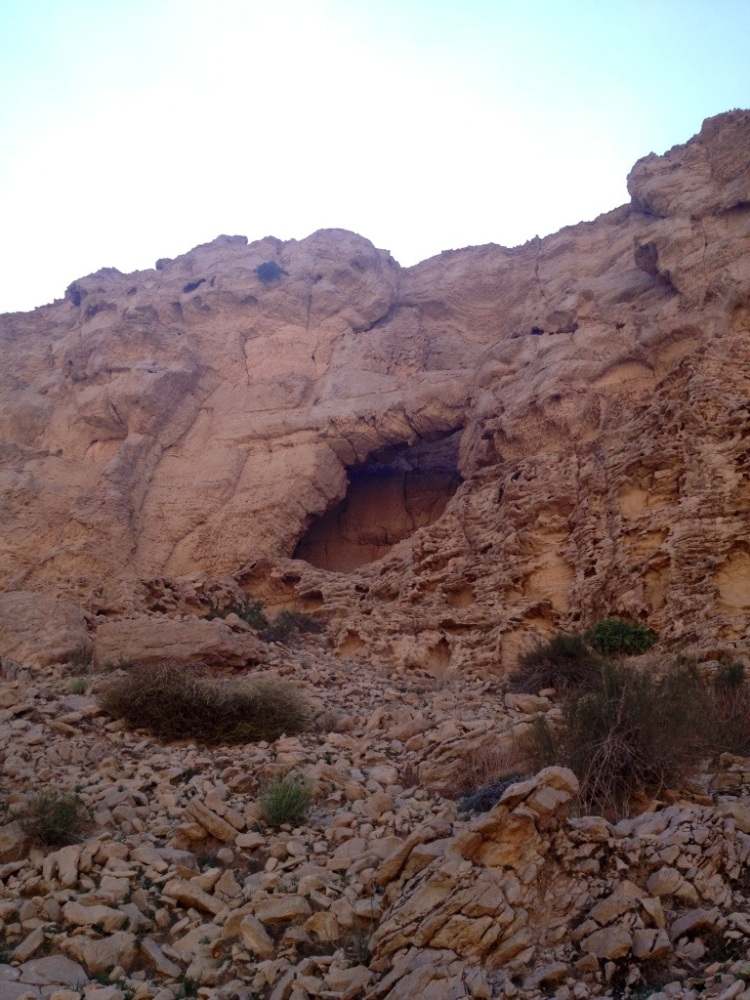 You make your way up all the way to the cave. A cave that is allegedly inhabited by lots of bats (love bats) but again, I saw none. Although I did see mountainous piles (not an exaggeration) of what must have been guano. I think the bats were way up in the cave, hidden in large holes in the ceiling and walls, that were located directly above the literally cascading piles of excrement.

Once you head back out of the cave, you start to scramble back down, following along the side of the ridge and its interesting and pointy formations. 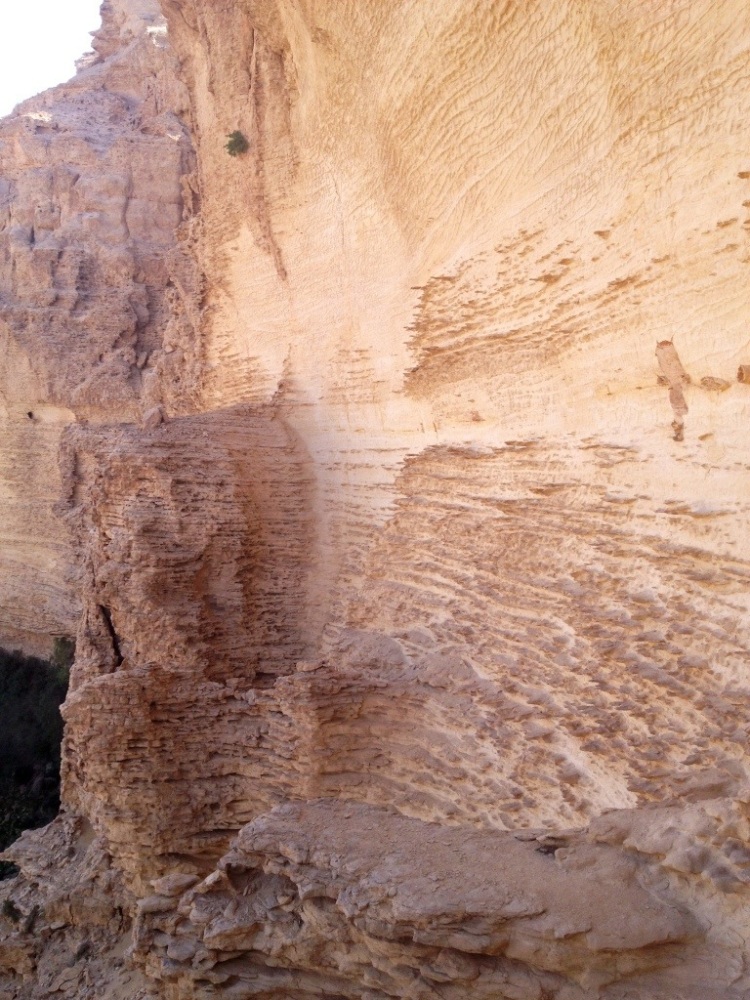 Shortly, you’ll make your way into the ‘hanging garden’ area, which is really very beautiful and unlike almost anything that I’ve seen around here. It’s suddenly rather lush and full of birds, with plant life even growing out of the cliff side. 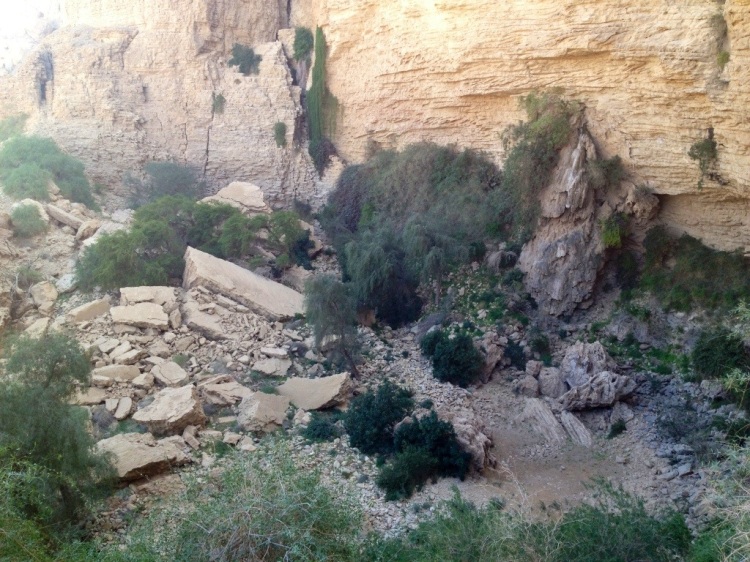 It doesn’t last for very long though, and as you continue following the base of the cliff, before you know it, you’re back on the moon. It was nice while it lasted though.

You can head back to point A various ways; we chose to do some more scrambling. I think the scrambling is in-avoidable, to be honest. But it was definitely more difficult getting back down than it was going up.

And that’s it, a great walk to be had, even if the border point is a nuisance. I definitely will be wanting to go back, and maybe stop off at the Al Ain Wildlife Park next time on the way home. I’ve heard it’s actually pretty nice, although I think that growing up with Pittsburgh’s zoo has spoiled me.

Next weekend, I’m trading in my dusty hiking sandals, sweaty tank top, skinned toes and bruised toenails – actually no, I suppose I’m stuck with the latter two – for a fancy day out at the Desert Palm resort & polo grounds for the Cartier International Polo Challenge Dubai. Since going last year, it quickly became my favorite Dubai event, much better than the World Cup races.

Other things I would currently recommend? They both might be new discoveries to me, but better late than never:

– iPad subscription to National Geographic magazine. So good, in my opinion, much better than the print subscription, which is still pretty fantastic.

– Red Dead Redemption: finally a worthy replacement for Skyrim, which at this point has been played to death and beyond in my house. In fact, I’m going to give it a play right now.

3 thoughts on “Hiking at the Hanging Gardens (Jebel Qatar), Oman”